Hi everyone, appologies for not posting over the past few days… been a bit busy.

We have been in Holland for a week now, and are settling in very nicely. Each day the team trains either once or twice, then there are things like team meetings/massage and physio appointments etc.
In the past few days all the other teams have arrived for the competition, and the atmosphere in the dining hall is fantastic- it’s like a mini paralympic village with the whole world in there!

All the teams (650 athletes in total- the most ever at a world swim champs) are staying in 3 hotels, from which we catch shuttle buses to the pool.

It seems all my main rivals are staying in the same hotel as me. On wednesday night I got a suprise when I was waiting for a bus and the mexican team arrived from the airport with my rival and friend Patricia Valle . Then the next morning I bumped into Karina from Denmark in the hotel lobby.

On thursday, unfortunately, i woke up feeling really sore and stiff all over. I could hardly turn my head my neck was so stiff, my forearms killed,, my back and trapezius muscles were hard as rocks- basically I felt like I’d been hit by a truck! I went to see our team Dr ‘Doc’ Jeff Thompson who was also with our team in Kuala Lumpur and Beijing in 2008. He explained that when I had a massage I had on tuesday the masseuse went far too deep and so all my muscles were now really fatigued and inflammed- just like I’d done too much hard exercise! How crazy, being hurt from a massage. He suggested I take the day off swimming and start on anti inflamatories. I think it was a good decision, though it was hard convincing my team coach Steve that I definitely shouldn’t be going to training.
Unfortunately that meant I missed relay practice too, so Ellie Cole ended up ‘impersonating me’ for relay changeovers while I was back at the hotel resting. I had room service dinner from the hotel menu so I didnt have to battle the busy busses to get to the dining hall at the pool. When everyone got back from the pool, my roomie esther had hurt her hand and so I went in search of the doc again – who kindly made a ‘room call.’

Then we finally went to sleep!

As many of you would know, 13 is my lucky number, but friday the 13th definitely wasnt my lucky day!

I woke up still feeling a bit sore, but decided to do a light training session in the afternoon. The team decided to head into the local village Veldhoven for lunch, but seing as I our team bus isnt wheelchair friendly I had to ‘walk.’ This turned out to be further than I thought and I was pretty tired by the time we got there. We all gathered in 2 restaurants- half the team at a steakhouse, the other at a sandwhich bar. I Got a mediteraanean sandwich before meeting everyone at the steakhouse. There we were joined by the ABC commentator Gerry Collins and executive producer Kirsty who will be putting together coverage of the meet. The team media liaison officer Beth also arrived.

Then it was announced we were departing at the pool at 1.30- which gave me 40 minutes to walk back to the hotel, pack my bag, change into uniform and get on a bus to the pool. I might have just made it….. if the hotel lift to my room hadnt broken down! I had to get someone to go up to my room and pack my bag and I got the bag just as I was racing outside to the bus. I didnt have my uniform on yet – it was in my bag- and the media crew asked me why I was going training is casual clothes.. well, I said, funny story that!

I raced onto the bus, then it sat there for 20 minutes waiting to see if any other passengers were coming. The rest of the team had left for the pool long before, as I go on a separate wheelchair bus with athletes from other nations who also use wheelchairs.

Finally at the pool I got in and did my session, only to discover I was so stiff I wasnt able to train properly. When I came to get out I discovered both my towels had somehow fallen in the pool,grrr, this isnt my lucky day I thought.

Continuing the crazy day theme, when the wheelchair bus arrived to take me back to the pool it had run out of petrol! The rest of the team had headed back to the hotel on their bus long ago and all up I stood at the bus stop by myself waiting for nearly an hour. Fortunately the ABC guys walked past not long after and stayed for a chat, it was great to hear what they have planned for coverage.
Finally the bus was ready to go. By the time I got back to the hotel the last thing I felt like was heading back to the pool for dinner…..so a group of us dined in the hotel restaurant. It is pretty groovy, a courtyard with an electric roof that oopens when it is sunny!

Back in our room again esther and I got busy decorating our room Aussi style. We hang a big aussi flag over our beds, one in the window and a boxing kangaroo on the wall. In th centre of the ceiling is our fab bunch of australia balloons, along with a string of mini flags. Completing the look is a series of pictures of teddy bears holding aus flags. Why bears? I was really bored and Esther had some teddy wrapping paper after purchasing a bear (she collects Teddy’s). So I decided to turn them into decorations! 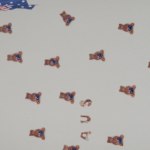 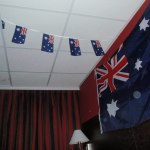 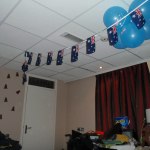 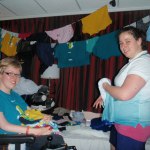