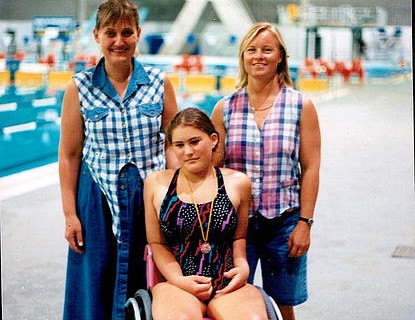 Olympic champions of the future were created in living rooms across the Sunshine Coast this week, as children sat transfixed front of televisions and mobile devices watching their sporting heroes winning medals and competing for Australia in Rio.

As parents a community now is the time to jump on board these young sporting dreams and encourage our young childhood dreamers to become childhood achievers. Participating in sport is not  all about winning or going to the Olympics, the sense of fun, friendship, teamwork, discipline, health and fitness benefits as well as mental acuity and joy are just many of the things which my fellow athletes and I  have walked away from sport with, irrespective of whether you compete at  Olympic level or socially.

How do I know this? As a triple Paralympian and swimmer medal winner myself my own sporting dreams were ignited as a young girl sitting in a pink wheelchair in front of the television watching the Olympics opening ceremony and dreaming about marching in the opening ceremony wearing a national uniform, and challenging myself to be the best that I could. I saw that TV and dreamed of making friends from around the world and of travelling while competing in the sport I loved loved (even if that at that stage I did go through though many sorts to decide which sport that was athletics, basketball and some highly embarrassing attempts at synchronised swimming in the backyard pool before I settled upon competing at swimming against the able-bodied children in primary school and then discovering para sport).

So it’s incumbent on all of us adults to nurture this next-generation. Whether it is local council or State Government funding sporting programs and backing Queensland’s bid for an Olympic Games, or local citizens and retired  athletes like myself volunteering your time or skills to  support  sporting programs such as I do through the charity I started Sporting Dreams and through the Sunshine Coast Coast sports Federation which is a united voice for sport on the coast. The rewards of giving back to sport have been even greater than those I received from winning medals while I was taking part.

Most importantly to theparents be sure to listen and take action  whether you have a child asking to play rugby sevens, to take up swimming like local silver medallist taylor McKeown, or  team sports like hockey played by our very own Jodie Kenny, or Sunshine Coast Matilda Larissa Crummer from Nambour. If your child has been inspired these Games then buy the gear and join the clubs, you never know where the journey may lead.

That is the power of community sport and the Olympic and Paralympic spirit.

How many Paralympic & disability references did you spot in the Rio Olympics opening ceremony and Games ?
Can Do Canada